This morning while we waited for Pat and Tony to finish packing up their tent, and before we said farewell to Punda Maria, Earl and I  paid one last visit to the hide.  This is the only camp in The Park that has a hide and a lit waterhole and it is frequently visited by many animals.  Elephants were already there and we watched them finish their ablutions and take on some refreshing liquid before they lumbered off into the bush.  It was quiet for a few minutes and then we heard loud and excited trumpeting and another herd came racing down to the water.  It was as if the little ones were calling – Mommy, I can’t wait to get into the water, please can we run ahead.

It was awesome and we would have lingered longer but it was time to head to Shingwedzi.  Earl quickly helped with the tent packing up and then we set off separately.   The only disadvantage of towing a caravan is that you can’t stop suddenly, nor do all the reversing and manoeuvring at a sighting as you would like to. Also there is always the fear that you’ll be confronted by an oncoming elephant!   So we took the direct tar road and only stopped when we could.   We did manage to have some lovely sightings but once we got to Shingwedzi, we set up quickly, had a bit of a rest and then went to the restaurant for lunch.  Pat and Tony met us there. They had taken the river road and had lingered over bird and animal sightings.

All the usual patron of the Kruger Restaurant were about – elephant, giraffe, buffalo, wildebeest and zebra so when we saw something a little out of the ordinary it peaked our interest.  This shy creature was kind enough to stop to have his portrait taken.

Another large herd of buffalo

We checked in at Shingwedzi at around 10:30 and quickly found a lovely site next to the fence and close to the ablution block.  We had some feathered hosts welcome us.  The red-billed woodhoopoes were quite vocal but seemed in a hurry to be somewhere else and didn’t stop to chat.  Mrs Burchell, hower, asked if had any crumbs for her.  No – sorry we don’t eat bread.

The arrow-marked babblers are always busy but blurted out their greetings as they flew from tree to tree.

After lunch P&T went to set up camp at Shingwedzi  while The Earl and I did the river route which was very productive.   The Mopani Diner was open and the patrons were helping themselves to their offerings.

I am safe here with my mommy

It was very hot and most of the birds were napping in the cool of the foliage. It was later in the afternoon when we started to spot a few as they emerged from hiding.   This lovely raptor was hoping there would be a slithering reptile on the menu.

Sometimes you have to take the kids out to eat too.  Mom is trying to teach this youngster that he must eat by himself now.

The next feathered diner we met is a new one for us.

At the same cafe, skulking in the foliage we found an old friend. 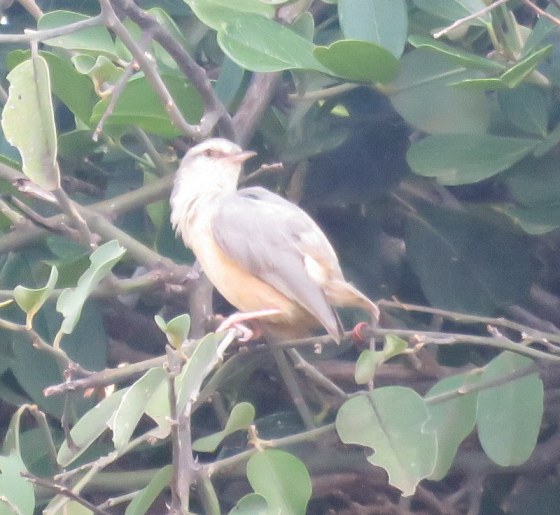 Some of the residents prefer to eat ‘seafood’  In this case, actually, it’s river-food. There were Egyptian Geese, Grey Herons, three-banded plovers and other waterbirds checking out the menu but our favourite was this lovely chap. 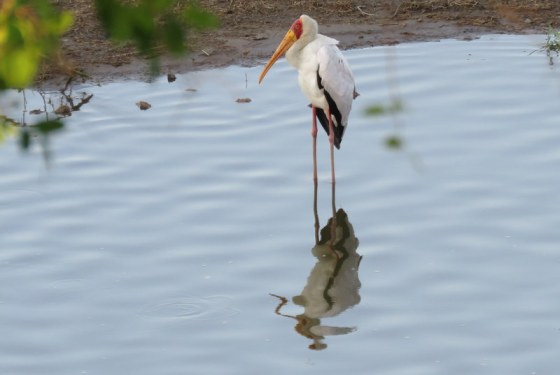 I have hundreds of giraffe photographs as I just love these stunning creatures.  I couldn’t resist taking more today.

We are only at Shingwedzi for one night.  We weren’t very hungry after our lunch at the restaurant so it was well after sunset when we braaied.    A honey-badger entered the campsite and tried to steal from the humans and a hyena passed by on the other side of the fence.  Hopefully he never finds his way inside. 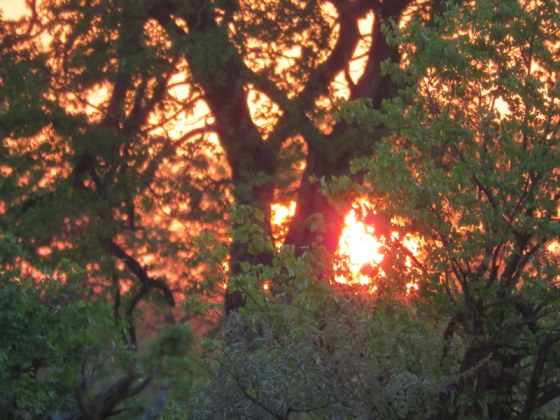 Tomorrow we head to Letaba for four nights.

We were all up by 5 am this morning and after packing a picnic brunch we set off to Pafuri Picnic Site and Crook’s Corner which are the places for keen bird watchers to visit.  The route is so pretty as it winds through Mopane woodland with some loops to waterholes and then there are areas where taller trees like the Fever Tree appear as well as quite a few Baobab trees.  The different shades of green are also frequently broken but a splash of colour from the indigenous flowers that pop up every now and then. 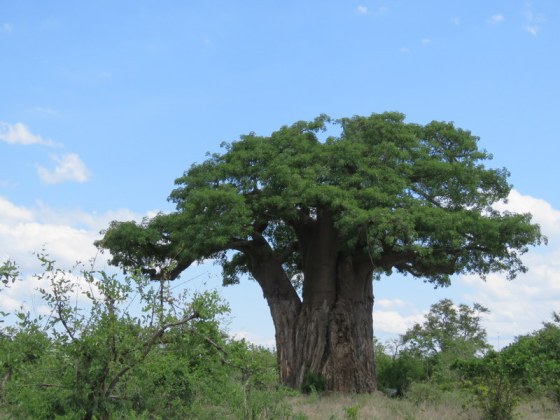 Having an extra pair of eyes is such a help in the park and sharing the experiences with people who are as passionate and appreciative of Nature as you are also makes a visit to a game reserve so much more rewarding.   Also when you’re going through those times where you wonder whether the creatures have packed up and gone on vacation you can chat and reminisce on past trips done together or relate stories about trips done separately.   There was a lot of  debating on what bird that was, reminiscing, fun and laughter in our car today!

It was cooler today and we enjoyed not having to deal with the fatiguing heat. The creatures seemed to be happier in the cooler conditions too and we were privileged to have some lovely sightings.

Birds of Prey are always exciting but these birds are difficult to photograph when they sit up too high on a tree, are too far away or the light is wrong.  We all had to get our eye in to help identify these tricky raptors.  The first one of the day stimulated a great deal of debate but we finally agreed that it was a Lesser Spotted Eagle.  (Heather and other experts out there who might read this – please correct any errors in our diagnoses.)

Would you believe that one of the most common birds in the park had us guessing for a few minutes until it dawned on me after not seeing one for three years that it was the female Red-Backed Shrike! 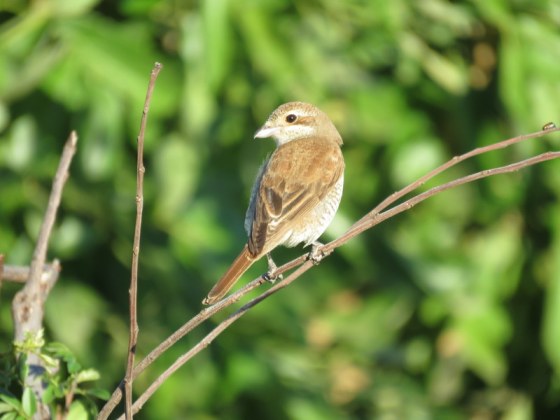 Almost as pretty as her mate

It was great to see a black-crowned tchagra

A beautiful male kudu with his magnificent antlers

At one point on our trip we found an abandoned antbear hole and observed some interesting bird activity.  There were a lot of flying insects around and they were having the time of their lives feeding in that spot.   Here are but a few of the species we saw.

Other birds that we were thrilled to find and get photographs of on our drive were the following.

The Go Away Bird (Grey Lourie)

It’s the unexpected little things that make a drive in The Park interesting and we get just as much joy out of them as seeing any of The Big Five.

“What’s that bunny doing in the tree?”   Well he might look like a rabbit but actually he is a tree hyrax and more closely related to an elephant – and No elephants don’t climb trees either.   A cousin of the tree hyrax is the more common rock hyrax.  The tree dassie has four toes on each of his front feet and three on each of his back feet.  They have rounded nails and rubbery soles to help them climb trees. 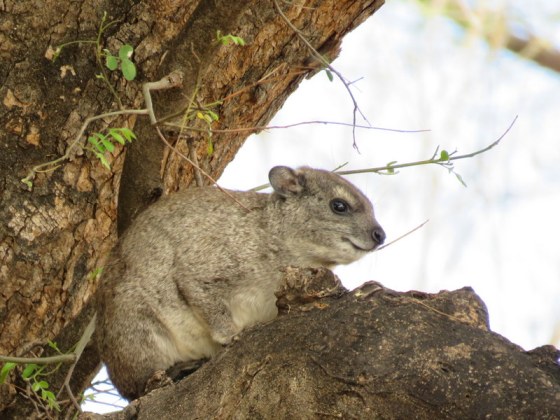 Isn’t this the cutest little tree dassie you ever could see!

We got out on the bridge overlooking the beautiful Luvuvhu River.

As we enjoyed the breathtaking view and observed some distant waterbirds Tony alerted us to a prehistoric looking creature below.

We stopped for brunch at Pafuri Picnic Site.  Some Nyala Females decided to join us. 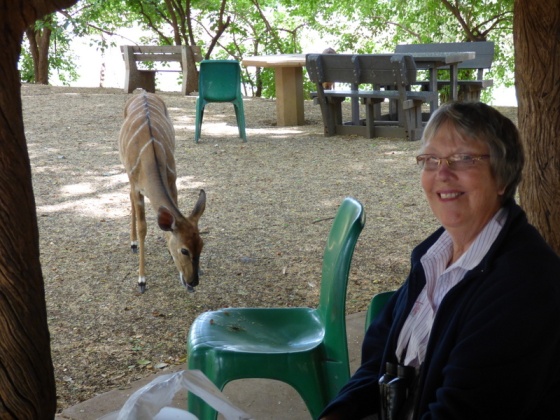 There were some cheeky monkeys about too.  But I just love them

We returned to camp and had a rest and then went out again for a short time.  We saw more elephants, zebra and birds.   The sunset this evening was stunning.

For supper we roasted a chicken in the electric Romosca Pot. I cooked a mix of veggies in the smart space pan on the  Snappy Chef.   It all worked beautifully and we enjoyed chicken with a crispy skin and delicious veggies.  Another Fabulous Day in Africa.

Today we took our leave of Shingwedzi and set off to Punda Maria.   It’s a distance of 70 km.  The packing up process went off with hardly a hitch – it gets easier every time – and we were off by 7:30.

It was a clear, hot morning and soon the temperature hit 32 degrees C.  Our first creature today was a buffalo.  He had a yellow-billed oxpecker grooming him. 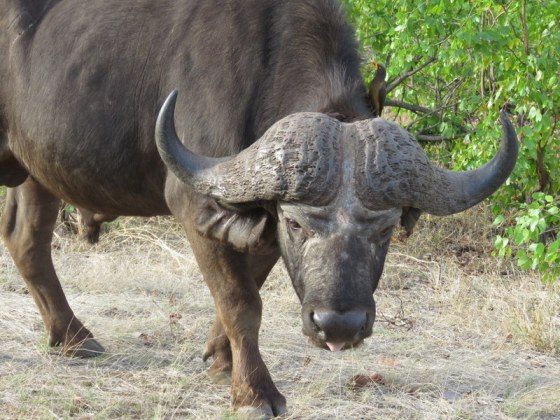 We also found some ground hornbills – this time walking on the grounds.  There were two adults and a juvenile.

It’s always fun to see zebra and today they were in a frolicking mood. 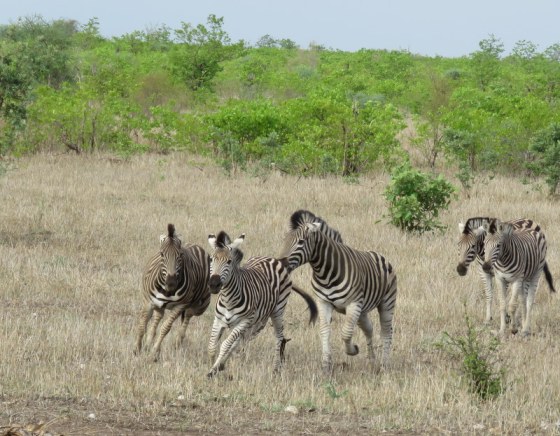 What a delight to come across a huge herd of buffalo under the trees. 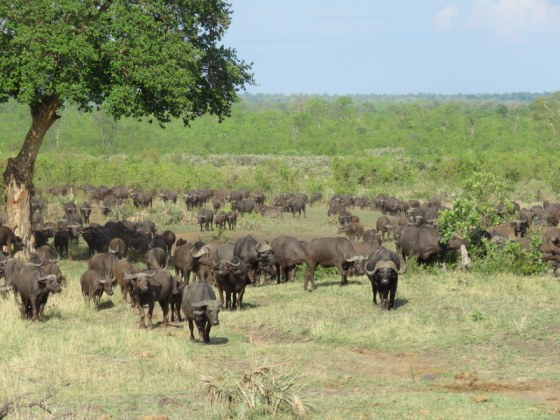 Don’t you just love the waterbuck?  We have seen so many on this trip in Kruger.   Their bottoms sport a white circle that resembles a target!   This serves as a following signal so that when they run through the bush those behind can see the white ahead and  prevent them from becoming separated.

We arrived at Punda Maria before 10 am and went straight to the campsite. 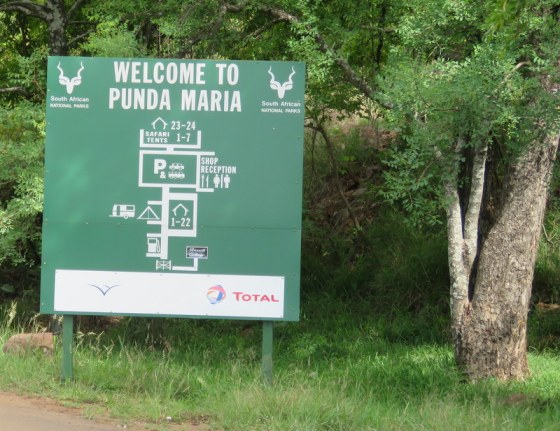 We found a suitable site and unhitched the caravan.  We have a perfect view of the waterhole on the  other side of the fence.  There is also a hide where one can sit and watch whatever comes to drink.

I went to reception to check in and when I returned The Earl had started setting up.  With just a tiny bit of help from me the rest of the canopy was up within 20 minutes.   We’d forgotten to fill the tanks with water but I located a staff member and asked is we could borrow the camp hose.  Not a problem.  The Earl joined it to his and the tanks were soon filled.

Now all we had to do was relax and wait for our friends Tony and Pat to join us later in the morning.  Earl had a nap and I sorted photos in cool of the caravan aircon!

Pat and Tony arrived at lunch time just as thunder and lightning warned that it would soon rain.  Some young neighbouring campers did not hesitate to step in and help to get the job done quickly before the heavens opened.  Then we sat under our canopy to have a drink and a snack.  The rain didn’t last too long but the thunder and lightning continued. At 3:30 we set off on an afternoon drive and although there was some rain we had a very productive afternoon.  The rain caused the temperature to drop to 22 degrees C which was a welcome relief. 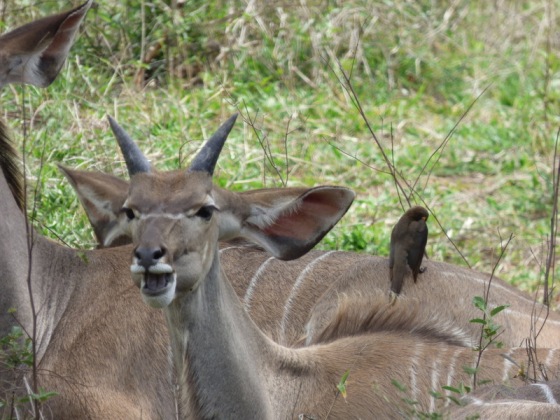 Young Male Kudu pulling faces – was he enjoying his grooming?

There were plenty of elephants about 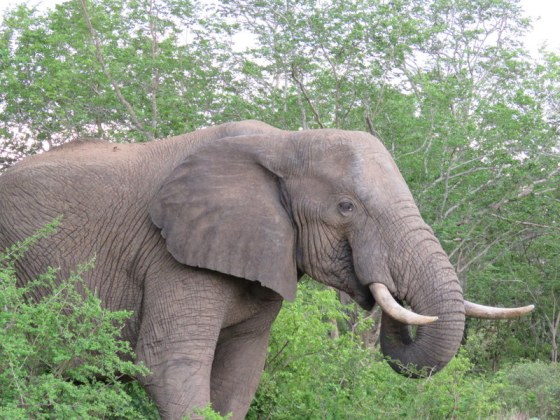 Elephants can hide – this one scared us with his sudden appearance 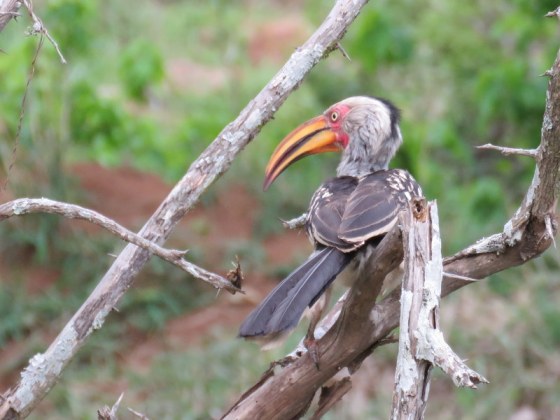 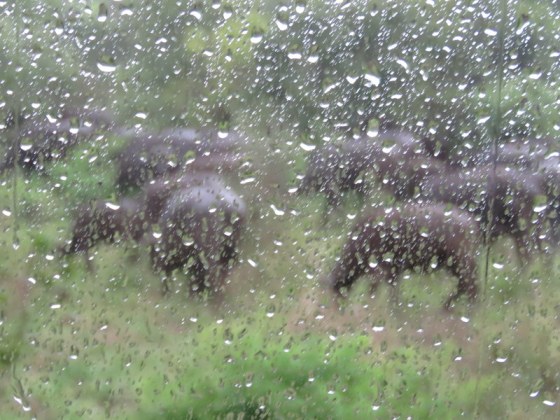 In the evening we had a braai and were in bed by 9. 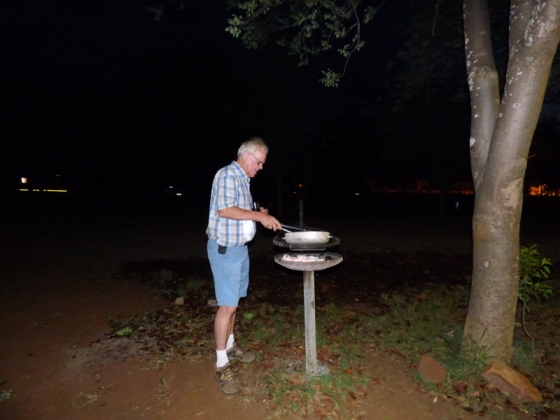 Fortunately the rain held off

What a scrumptious meal of steak, chops, boerewors, spinach, sweet potato and salad.